Arctic peoplesIcelandSustainable Development Working Group
The second Arctic Resilience Forum was hosted entirely online – and successfully so. We spoke to the two main organizers: Jennifer Spence, the Executive Secretary of the Council’s Sustainable Development Working Group, and Joel Clement, Senior Fellow at the Harvard Kennedy School’s Belfer Center for Science and International Affairs. We asked them about the challenge to move the forum into the virtual realm, the unexpected benefits and the ambitious next steps for resilience in the Arctic. 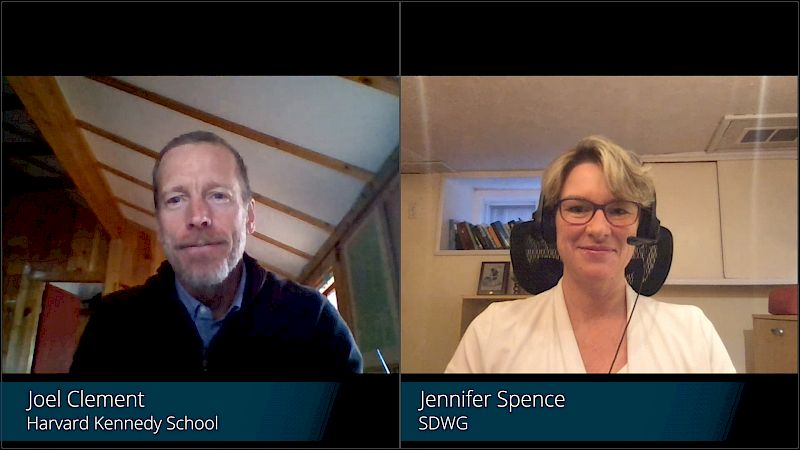 Could you briefly outline the format of the first virtual Arctic Resilience Forum?

Jennifer Spence: It has been an interesting evolution of the process. Originally, we were planning for an in person event but it became clear early on that this was not going to be possible. So, we had to transform it in a way that would carry online and I think we found a way on how to do that.

Joel Clement: I think we have been lucky. Doing this virtually has allowed us to reach a lot more people and splitting the format into weekly sessions has allowed people to count on it each week and to tune in to the latest episode. So, it has been fun for people and attracted some great speakers.

Jennifer Spence: Through the thematic approach of the forum we have tried to identify some key themes that are relevant today but also over a longer period of time. Then, we tried to weave these together into the overarching theme of resilience.

Jennifer Spence: And one of the things that really comes home, is the idea of community. The concept of resilience has to start at the community level. We can look at it in a broad, overarching way but when you get down to the blueprint, when you think about what this means, it is at the community level that this has an impact.

Would you say that the pandemic has increased the interest in discussing Arctic resilience?

Jennifer Spence: I think the pandemic has sparked the realization that there are challenges in the Arctic that need to be discussed. Resilience is such a great concept to draw these issues together because it motivates us to think forward and to think about how we can advance the resilience of Arctic communities and environments, in a way that is constructive and focused on moving forward.

Joel Clement: I agree, I feel like you are catching on the definition of resilience that we so often want to amplify, which is the ability to not just bounce back from shocks but to bounce forward and to thrive. The word itself does not always translate into every Arctic language but the concept of studying those interconnections and understanding what it means to do better next time has really caught on.

The Arctic Resilience Forum moved online – how has that turned out?

Joel Clement: The one thing I really like about the forum succeeding online, is the amount of CO2 we have not put into the atmosphere. I hope that this might be a model going forward: how to bring people together and not to feel that we all have to be in the same place. Obviously, we all miss each other, but maybe if we gather in person less, maybe we do it more efficiently.

Jennifer Spence: I feel quite strongly that we have reached broader communities and brought them into the discussions. We have felt the hick-ups of connectivity being an issue in the North – as have the different time zones. So, we have to respect that some people have an easier time of linking in to these types of events when they are online. It emphasizes the importance of some of the issues we are talking about and addressing, like broadband connectivity.

What outcomes are you hoping for?

Joel Clement: This time around, we really want to establish some findings, a blueprint of how to build resilience in the Arctic. So, rather than just talking about resilience successes or failures, which in itself is good, we want to look at the interactions among these resilience issues and look forward to some concrete next steps that Arctic States, Permanent Participants and Observers can take.

Jennifer Spence: There will be a written report coming out of this. We also are working on summaries for each of the sessions, which will have a future-oriented component to it: what have we learned from this, what can we take away that actually informs what we do next. It is exciting that we will have a chance to present this directly into the Arctic Council through the Sustainable Development Working Group and hopefully on to Senior Arctic Officials and to Ministers. What I would like to see is that we use it as a reference when we are working on issues related to food security or infrastructure in the Arctic Council context.

Joel Clement: That is absolutely right, an actionable blueprint. We don’t want to make this an academic exercise. This is about making life better on the ground in the Arctic.

This was the second Arctic Resilience Forum, to what extent does it build on the first?

Joel Clement: The difference between this Resilience Forum and the previous one in Rovaniemi is certainly the audience because we are hosting this online. But we also have a lot more organizations involved in the planning of the event. I think this is largely due to timing, both due to the pandemic bringing us into a virtual environment and the eagerness of people to engage in resilience right now. So, we have just picked up the ball where it was in Rovaniemi and elevated it still further. Our hope is that in two years, during the Russian Chairmanship, we will take a further step forward and hopefully, it will be a hybrid format between a virtual and an in person meeting by then.

Jennifer Spence: Iceland recognized and valued the concept of resilience and the Icelandic Chairmanship has really put their support behind this second resilience forum. They gave us a huge amount of freedom to work with a broader community. So, they were the ultimate hosts in terms of giving us the support and encouraging us to work with key people throughout the Arctic.

In addition, we had strong Russian involvement. The Russian Federation has really stepped up its engagement in this forum and has been engaged in a lot of the topics – both organizing and speaking at the event. This is demonstrating that there is real potential in this as we are moving forward.

What are the next steps?

Joel Clement: We really want to keep the community engaged and motived to continue the work, we want to keep building those linkages between partners, across the themes of resilience and across the Chairmanships of the Arctic Council.

Jennifer Spence: And in order to do that, we are working on a final wrap up session in January where we are going to try to bring together the organizers, including representatives of the Arctic Council, to really talk about lessons learned and the themes.

All recordings of the Arctic Resilience Forum are available on the website of the Sustainable Development Working Group and and the full interview with Jennifer Spence and Joel Clement is at hand here below.