Building a sustainable future with lessons from the past

The Sustainable Development Working Group’s “Zero Arctic” project develops concepts for carbon neutral constructions in the Arctic. By drawing on both expertise from scientific assessments and traditional knowledge, the international project team works on solutions that can lessen the energy consumption, greenhouse gas emissions and resource use of future buildings.

Globally, buildings and construction account for more than one third of all greenhouse gas emissions. In addition, the sector consumes around half of all global raw materials that humans extract from nature, such as stones, sand, soil and wood. Especially in the Arctic, construction can lead to exceptionally high energy consumption as building materials are often transported over long distances and harsh environmental conditions increase heating demands while decreasing the service life of a building. Despite their significant impacts on the environment and climate, the built environment and construction methods in the Arctic have received very little attention from researchers.

“So, we decided that this was something we wanted to take a closer look at”, says Dr. Matti Kuittinen from the Finnish Ministry of Environment. Dr. Kuittinen is one of the co-leads of “Zero Arctic: Concepts for carbon neutral Arctic construction based on tradition”, a project of the Arctic Council’s Sustainable Development Working Group, which brings together an international consortium led by the Finnish Ministry of the Environment and Crown-Indigenous Relations and Northern Affairs in Canada.

The focus of Zero Arctic is to develop regional concepts for Arctic construction that can be carbon neutral over their full life cycle with the ambitious goal of integrating “the methodological novelty of uniting traditional architecture and life cycle assessment approaches to develop concepts that are sustainable and carbon neutral”, says Sarah Cox, Canada’s head of delegation to the Sustainable Development Working Group. “The building traditions of Indigenous peoples form a large warehouse of know-how. They offer millennia of successful and unsuccessful examples of how to build and use buildings efficiently and in a resource-wise manner.”

The evolution of sustainable buildings

Zero Arctic is based on case studies from Finland, Canada and the Arctic Council’s Observer state Japan. This provides an interesting set of studies from Northern Finland, Northern Canada and the island of Hokkaido in Japan, where buildings face similar challenges to Arctic regions. Each case study consisted of a survey of Indigenous housing, of structural solutions and settlements, and a review of the energy consumption of the existing building stock.

“We wanted to see which principles of traditional dwellings would still work today. They might not fulfill our modern standards of energy efficiency, but they were developed at time when there was no need for energy efficiency in the way we know it today. They evolved in the environmental conditions of those days and in their historical context, they were optimal”, states Matti Kuittinen. Their strengths, he points out, lie in the use of local and mostly bio-based materials, in designs that are easily relocated, reused or deconstructed, and in having rooms or spaces with different temperature for different purposes.

The Ainu, the Indigenous people of Hokkaido and Tohoku Japan, for example used a lot of straw and grass for traditional housing. Thus, utilizing a natural resource that regrows quickly and is more sustainable than wood on shorter timespans. “The Ainu used local materials to build and insolate their traditional residences from the cold climate. However, when we study their housing and adaptation strategies, we need to consider their entire lifestyle, including their culture and clothing”, says Taro Mori, associate professor at Hokkaido University and project lead for the Japanese case studies.

Thus, sensitivity towards distinct cultures and the recognition of one’s culturally related assumptions are key if one wants to avoid building design solutions that are environmentally sustainable but unintentionally modify the culture of its inhabitants. “Every building should be a result of its culture and environment. I think problems arise if you try to implement something in Indigenous communities that is not an organic result of their area”, Matti Kuittinen emphasizes and Sarah Cox adds: “For the Canadian case study, we examined a prototype that was designed and built for the Nunavik communities in northern Quebec based on a partnership between the provincial government and the regional Inuit organization. This collaborative process resulted in a home that is designed to reflect Inuit culture and lifestyle, and achieve high energy performance.”

Sustainability from cradle to grave

So, what makes a building in the Arctic sustainable? A question as easy to answer as what makes a good life, Matti Kuittinen points out. “It depends on a number of factors. While a building can be sustainable in Northern Finland it might not work in Alaska or on the high plateau of Tibet. Generally, we can say that a sustainable house is one that is optimized over its full lifecycle and this approach enables us to find the locally most sustainable options.”

The life cycle approach follows the sustainability pathway of a building from cradle to grave, distinguishing four phases: the production of the material, the construction, use and repair of a building and, eventually, its demolishing. Thus, it also takes the embodied emissions into account. “If we look at your office: you have the lights on, are powering your computer, the ventilation is working – all this is related to the use of the building, thus, these are operational emissions. But if you look around you and see all the walls, the ceiling, these were made somewhere before the building became operational and these processes caused emissions. This is what we call embodied emissions, which also includes repairs, introducing new materials and the demolition waste”, Matti Kuittinen explains.

What makes a building sustainable in Finland, Canada or Japan will vary based on three key factors. Firstly, the energy regulations of these countries are different and builders will optimize a construction against the nationally required energy efficiency levels. Secondly, the features and shapes of a building are very different across these three case study countries. And thirdly, buildings in the three countries face different climate and environmental threats. In Finnish Lapland, the snow is getting much heavier, adding to the structural stress, whereas in the Canadian Arctic thawing permafrost poses challenges and can lead to the need to relocate buildings.

In order to develop recommendations for sustainable buildings in the Arctic, the project team simulated the energy performance of different building types. They changed certain parameters to see how this would affect the energy efficiency and calculated the carbon footprint of materials that could be brought in to save energy. “We can’t make a solution that fits all. But we are strongly advocating for the life cycle approach and enhancing the resilience of constructions as the weather gets turbulent, sea levels rise, and permafrost is thawing. Therefore, maintainability, repairability and the possibility to relocate buildings become important. If we can build something that is sustainable in the Arctic it will be beneficial for the entire planet because it’s being tested in such harsh conditions”, states Dr. Kuittinen.

The final report of Zero Arctic, which will be presented to the Foreign Ministers of the eight Arctic States at the Council’s Ministerial meeting in May 2021. To learn more about Zero Arctic, visit the project page. 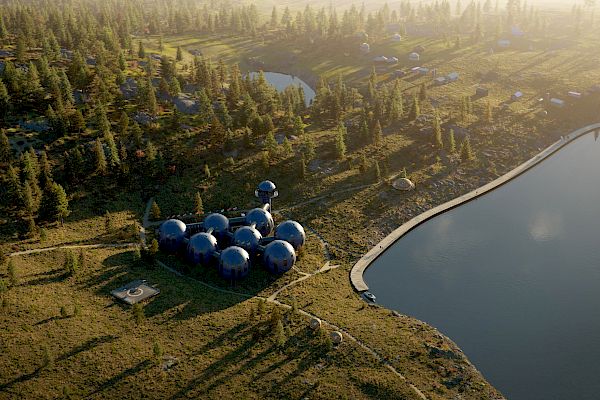