Innovating the food industry on the top of the world

Arctic PeoplesClimateCanadaFinlandIcelandThe Russian FederationAleut International AssociationGwich'in Council InternationalSustainable Development Working Group
For millennia, food production has supported population growth, the development of towns and cities, trade and other elements essential to successful human development. Yet certain characteristics of the Arctic create unique opportunities and challenges in food production – and some potential that has not yet been reached.

Many think of the Arctic as a place of harsh climate and scarcity, but the region is home to a strong food culture built on 10,000 years of knowledge and experience. While the Arctic is already an important food-producing region, it has not met its full potential in satisfying local food needs nor in maximizing its export potential. By enhancing commercial food production locally and by developing North to North food production linkages, more sustainable food systems can be developed in the Arctic.

While there are considerable opportunities for commercial food production, Arctic food industries are challenged by a plethora of rapidly changing climatic, social, economic and logistical constraints. But the Arctic – a region characterized by constant change – shapes inherently resilient peoples. Innovation is ripe throughout the region; the right links just need to be made.

The Arctic Council’s Sustainable Development Working Group (SDWG) made developing these links its goal with the Arctic Food Innovation Cluster project. Through the project, SDWG works to identify and connect relevant people in the Arctic foods value chain – including northern entrepreneurs, southern-based investors, research centers, business and bio-technology developers that have knowledge and interest in the Arctic food industries.

The Arctic as a Food Producing Region

SDWG developed the Arctic as a Food Producing Region report to collect research on the potential for increased food production and added value of food from the Arctic. Prominent food industries identified in different Arctic regions include fisheries and aquaculture, agriculture, herding, hunting and gathering. SDWG’s report found that the Arctic is already a considerable producer of commercial foods. In 2016, the total export volume exceeded 5.6 billion kilograms and generated an estimated value of $24.8 billion USD.

The Arctic’s unique environment gives way to unique food and production methods. For example, Arctic char farming operations in Iceland use water that is extracted from springs, boreholes and wells which, according to the EU’s water framework, is classified as unique quality. Geothermal energy produced by hydroelectric power stations is used for heating and electricity and are the basis of vegetable production in greenhouses in Iceland.

In Norway, a survey revealed that 62 percent of consumers are willing to pay more for Arctic food products. Across the pond, 86 percent of surveyed Canadians indicated they are willing to buy foods sourced from the Canadian Arctic and 77 percent indicated that they are willing to try Indigenous-inspired foods. Overall, surveyed Canadians held a favorable attitude towards Arctic foods and believed these foods allowed them to experience Indigenous cultures and tradition, support local Indigenous communities, impose less risks to human health, are more natural and are from a pristine environment.

SDWG’s report found that while food production opportunities and consumer demand are promising for Arctic communities, it is not without challenges. Lack of infrastructure, available raw material and skilled workforce, as well as environmental issues and food security are some of the main challenges to food production in the Arctic. Despite notable challenges, SDWG found that most actors in the Arctic food value chain were overwhelmingly favorable to food production and the need for a more formal and coordinated means of cooperation.

A cluster-based approach to food innovation in the Arctic

Arctic food industries tend to be fragmented, have tenuous professional connections and have limited connection streams. This lack of coordination has led to Arctic communities’ general overreliance on raw food exports, bottlenecking of distribution points and limited innovation in product development.

Strengthening these connections is a major goal for SDWG’s Arctic Foods Innovation Cluster project. By identifying relevant actors in Arctic food production, governments, Arctic Indigenous communities, universities, research centers, vocational training providers and industry associations and drawing them together into a so-called “cluster”, the project will bring the enhanced coordination needed for the Arctic to fill its international potential.

With hubs located in each Arctic State, the Arctic food cluster will increase communication, provide a framework for capacity building and coordinate activities. Those who participate in the cluster will benefit from professional linkages that are established, where knowledge spillovers are enhanced and innovations in the Arctic food system are achieved. The benefits for Arctic communities and businesses include opportunities for innovation, development and diversification that can transform the local food and drink sector – creating sustainability at the local level while redefining the food economies of the future. 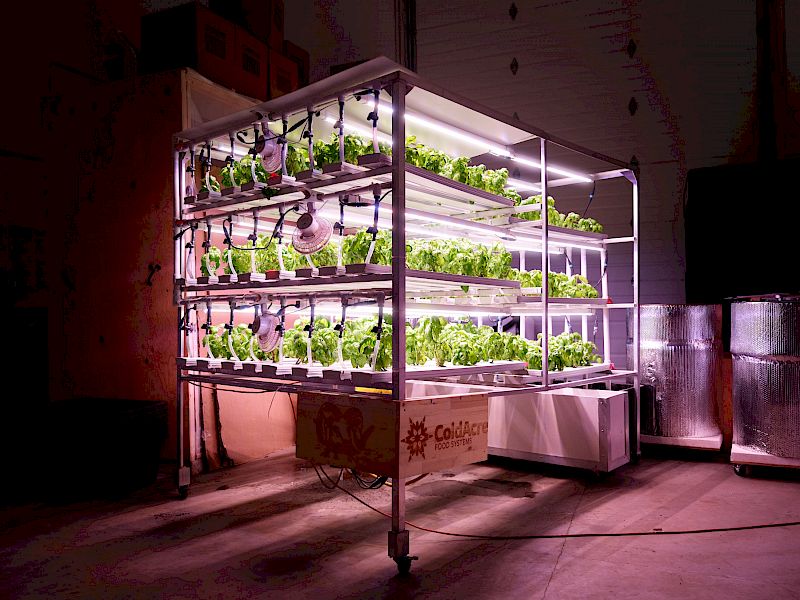 Piloting food innovation across the Arctic

How do you build a food innovation cluster? Steps one and two involve identifying and consulting with Arctic food value chain actors. This research involved diverse food production actors, from those with personal experience with growing food year-round in Arctic greenhouses to the Department of Fisheries and Oceans in Canada. Now, SDWG is implementing pilot projects in different Arctic regions.

In the community of Inuvik, Northwest Territories in Canada, a pilot project is getting underway to establish a hydroponic market garden, which uses nutrient-infused water to cultivate plants without soil. This pilot will lead to the development of an agri-business model that focuses on local food production, value-added food processing and agri-business development. The hydroponic garden will be used as a training and innovation platform, which will expose community members in Inuvik and other Northwest Territories communities to the socio-economic benefits as well as the operational requirements. This broader exposure will be critical for the scaling out potential of the hydroponic garden to other communities in the region.

In Russia, research is underway in the fields of agroforestry, aquaculture and biotechnology to identify how innovations can be used to foster sustainable manufacturing and the promotion of local food products in the Arctic. This pilot will introduce agroforestry practices that combine agricultural and forest management technologies aimed at diverse, efficient, profitable and environmentally sustainable land use systems. Scenarios will be identified for multi-purpose use of forests and forest-related products, and research is underway to develop unique, crude plant-based products.

Through the pilot, a series of comprehensive studies are being conducted into the state of marine ecosystems and aquatic bio-resources in the Russian Arctic, including the use of White Sea seaweed as an ingredient of novel products. The recommendations are being made on enhancing the interaction between the food producers, communities and stakeholders based on opinion survey, market research and best practices analysis. The research results are planned to be discussed at the upcoming International Congress of Arctic Social Sciences X in June 2021 in Russia.

Finland participates in Arctic Food Innovation Cluster through a networking project dealing with climate change adaptation from the perspective of food security, forests and nature-based tourism and livelihoods. Arctic collaboration and sharing of experiences and concrete tools for adaptation are an essential part of the Arctic Network for Climate Adaptation and Food Security (ACAF) project. Many networking events are planned for 2021.

As a part of the project, Finland is also defining why clustering matters on national, European Union and Arctic levels. At the EU level, the aim is to search models for a thematic EU-cluster, which consists of relevant national thematic clusters. The result of the Arctic Food Innovation Cluster project will be a business model for its national hub, which can offer support to small and medium-sized enterprises and developers, and connect different stakeholders on different levels for finding the ways to support food security and safety.

One major outcome from consulting with Arctic food stakeholders is that a strategic and coordinated approach to mobilizing a social enterprise method of food and nutrition security in Arctic regions is required. This need is compounded by the events of the Covid-19 pandemic, which threatens food supply chains.

A need was identified for a policy research platform that would enable Arctic food stakeholders to share experiences, lessons learned and policy responses to food production challenges and opportunities experienced by Arctic communities. Such a platform would focus on food system transitions, socio-economic dimensions and interface with environmental dynamics. It would ultimately deepen the understanding of these dynamics and build the evidence base for policy and development interventions that contribute to sustainable food and nutrition security and economic development.

To promote the development of Indigenous food innovations, SDWG is collaborating with the Association of World Reindeer Herders (AWRH). AWRH hosts an Indigenous Food Innovation Leadership Program, which trains Indigenous youth in the documentation of traditional knowledge related to food, food entrepreneurship and innovation. Through this collaboration, SDWG will identify opportunities to diversify local economies by solving the problem of bringing untapped food resources to new markets in ways that benefit the primary producing Indigenous societies.

With pilot projects and strategic collaborations underway, SDWG aims to deliver the final framework for establishing an Arctic Food Innovation Cluster in 2021. Then, it’s launch time.