The Russian FederationPathways
May 2021 marks the second time Russia will assume the Chairmanship of the Arctic Council.

In a quarter of a century of its existence, the Council, whose anniversary we are celebrating this year, has turned into an influential forum for intergovernmental dialogue between the Arctic States on sustainable development of the region. The Arctic States, which carry special responsibility for the future of the region and its inhabitants, including Indigenous peoples, have been consistently working to preserve the region as the territory of peace, stability and constructive cooperation.

Global climate change has a strong impact on the Arctic region, which is warming two to three times faster than the rest of the world. In this regard, in addition to addressing climate change issues, adapting livelihoods and enhancing their resilience to its effects, we need to give our immediate attention to managing environmental risks in the context of further development of the region.

Russia, whose territory covers almost one third of the Arctic with more than 2.5 million inhabitants, is implementing a comprehensive integrated program for the development of the High North. We therefore intend to focus Russia’s Arctic Council Chairmanship on integrating into the Arctic Council activities the principle of promoting sustainable development in a balanced way – in its social, economic and environmental dimensions.

We hope that our Chairmanship in the Arctic Council will further strengthen Arctic cooperation between countries and regions, as well as promote people to people contacts and collaborative approaches to achieving shared goals and finding the best common solutions to emerging challenges.

We are willing to prioritize improvement of the well-being and quality of life of Arctic inhabitants, including Indigenous peoples, and to ensure progressive social development, which depends first and foremost on sustainable economic growth in the Arctic. We note the region’s growing positive potential in that respect. It is important to be mindful not only of its vulnerability in the face of climate change but also of its prospects and capability, owing to its natural, energy and transport resources, to substantially contribute to energy transition to an environmentally neutral economy and, accordingly, to the fulfillment of goals and objectives of the 2015 Paris Agreement.

Over the past 25 years, environmental activities – and development of practical environmental cooperation between the Arctic States in particular – have been and remain the priority area for the Arctic Council. This includes protecting the environment, offsetting the cumulative environmental impacts and preserving the fragile ecosystem. We are planning to organize the Third Arctic Biodiversity Congress and a series of events on management of marine resources.

Peoples of the Arctic are the custodians of their history, which goes back thousands of years and has shaped the identity of the Arctic region, making it a unique part of our planet not only in terms of special natural and climate conditions but also in terms of Indigenous peoples’ culture and traditions. We plan to devote a number of the Chairmanship events and projects to the preservation of the Indigenous peoples’ cultural and historical heritage. Special attention will be paid to supporting their languages in line with the goals for the UN International Decade of the Indigenous Languages 2022–2032.

We hope that our Chairmanship in the Arctic Council will further strengthen Arctic cooperation between countries and regions, as well as promote people to people contacts and collaborative approaches to achieving shared goals and finding the best common solutions to emerging challenges. 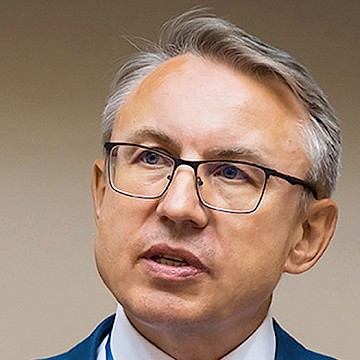 Ambassador at Large for Arctic Cooperation, MFA of Russia

After graduating from the Moscow State Institute of International Relations, Nikolay V. Korchunov began his diplomatic career in 1991 and has since then occupied various positions at the Headquarters of the MFA of Russia and abroad. He speaks English, Swedish and Spanish. He is married and has three children.