Introducing the new CAFF Chair: “The Arctic is important for everyone”

ФинляндияРабочая группа по сохранению арктической флоры и фауны
Dr. Mia Rönkä is an ecologist, science editor and journalist, writer, poet and the new Chair of the Conservation of Arctic Flora and Fauna Working Group (CAFF). The leading interest that guides her work –as scientist, journalist and artist – is the relationship between humans and nature. A theme that she likes to explore across the borders of disciplines. And, crossing borders is also something she hopes CAFF’s outreach will do, because everyone has reason to be interested in Arctic ecosystems and biodiversity, she believes. 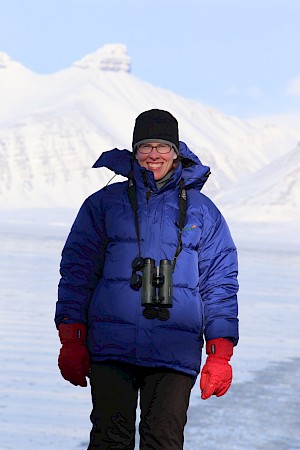 Mia Rönkä steps on the podium of the Arctic Biodiversity Congress in Rovaniemi, Finland. In her hand she has speaking notes, a pair of blue working gloves and a taxidermy raven. She softly taps the bird’s beak on the microphone, then lays the gloves to the side, holds the bird closely to her body and begins to speak – or rather to recite. Because when the Mia Rönkä addresses the audience at that moment of CAFF’s 2018 congress, she does so as a poet (view her performance here).

One could say Mia Rönkä wears many hats. She is Adjunct Professor in Environmental Ecology at the Biodiversity Unit of the University of Turku in southern Finland and a researcher focusing on multidisciplinary environmental science, biodiversity and ecosystem service research. In 2013, the Finnish Ministry of the Environment appointed her as Finnish representative to CAFF’s Circumpolar Seabird Expert Group (CBird) and four years later, she became the group’s Chair. She has written non-fiction for adults, three children’s books, published a poem collection (with a second one on its way), worked as science editor and journalist, performed as poet, held workshops for adults and children, produced science videos and initiated a range of exhibitions and events at the science and art interface.

However, Mia Rönkä is not a person who changes roles like accessories. She likes to work at the interface, crossing the boundaries of disciplines and looking for wider entities and connections. “It’s a red thread in my work to look over borders and to find connections between different disciplines in art and science. The topic I’m interested in is the relationship and interaction between humans and nature,” Mia Rönkä states. Crossing boundaries is also reflected in her interest in international work.

Creativity is one of her means to convey knowledge and nature a major source of inspiration. She creates stories and narratives that open the reader’s eyes to the immediate surroundings and at the same time empower the audience. “I want people to see how they can influence their near environment with small actions. I want to share the value nature also has in our backyards, in cities and on schoolyards. And, I want to counter misconceptions with scientific knowledge and bring in aspects of diversity both in nature and in people. A person can be manifold and should not be defined by one characteristic or role alone” Mia Rönkä says.

When the Finnish Ministry of the Environment approached Mia Rönkä again, this time to ask her if she would be willing to be the Chair of CAFF during the Working Group’s Finnish Chairmanship, she immediately said yes. She was familiar with CAFF’s work, the secretariat, the Board and many of the experts – but there was more: “I have this calling for Arctic work, for the conservation and sustainable use of the Arctic ecosystems and biodiversity, natural resources and ecosystem services, and an interest in the cultures and lifestyles of the Indigenous Peoples in the Arctic. I also felt that I would have something to give because of my background and experience at the science-art interface, in communications and scientific dissemination, and I was eager to put that into use in CAFF.”

Mia Rönkä says that she has always been attached to the Arctic, to the nature and life in the High North. Her mother is very interested in the culture of the Sámi and so, Mia already as a child encountered e.g., the work of the famous Finnish Sámi poet Nils-Aslak Valkeapää, or Áillohaš. It planted a seed for a lifelong Arctic interest, which she now hopes to spread further.

Co-creation, dialogue and dissemination rank high on Finland’s CAFF Chairmanship and will be embedded in the Working Group’s ongoing work and new initiatives. Over the next two years, CAFF’s experts will for example work on the Action Plan for Arctic Biodiversity 2023–2030. “We are aiming for a participatory process, which will engage different stakeholders. We will put a particular focus on engaging the Permanent Participants and Arctic youth,” says Mia Rönkä. The Action Plan will help to evaluate, communicate and guide the Arctic Council’s actions on biodiversity and feed into the global biodiversity framework and sustainability goals.

The second priority, Mia Rönkä emphasizes is to enhance the co-creation and communication of Arctic biodiversity conservation. “We want people who are managing and using Arctic ecosystems and biodiversity to be involved from the beginning in creating the management and conservation plans. Also in research, co-production of knowledge and utilization of Indigenous Knowledge is key. It is of utmost importance to collaborate with Indigenous Peoples and local communities. Furthermore, Arctic ecosystems and biodiversity are important for everyone, also outside the Arctic, in terms of for example climate change.”

And finally, collaboration within the Arctic Council family itself is a priority. CAFF and the Arctic Monitoring and Assessment Programme (AMAP) are developing their first joint project, which will investigate how climate change impacts Arctic ecosystems. “We want to strengthen the collaboration with the other Working Groups and the CAFF-AMAP project is a great showcase. We will look at feedback, resilience and adaptation related to climate change effects and at how Indigenous Peoples, their cultures and livelihoods are affected by the ongoing changes,” says Mia Rönkä.

Searching for the dialogue

To back up these priorities, Mia Rönkä and her team have applied for additional funding from Finland. They are also planning to make the best use of CAFF’s Board meetings. “We will arrange all meetings in Finnish Lapland and most of them in the Sámi home land and we are hoping to create a space for a two-way dialogue during these sessions. We want our delegates to learn from the local nature, research and culture, and at the same time, we want to inform local communities about CAFF’s work and its relevance for them and have their feedback.” The first meeting in September 2021 will still be a remote meeting held from Kilpisjärvi, Gilbbesjávri, but already the second will hopefully be in person.

CAFF’s Chairmanship team and the secretariat are moreover developing a communications plan, including an initiative that is right down Mia Rönkä’s alley: a writing competition. “We hope to get further perspectives on how Arctic youth perceive the Arctic nature, biodiversity and conservation issues, how they experience environmental changes and how they feel about their future life in the Arctic.” We can probably expect the CAFF Chair herself to sit in the jury of that competition and maybe it will inspire her future artistic work.