When we first had electricity in our community, in about 1978, my grandfather – it is said – could run with the caribou. Now, his grandson is flying around the world with a supercomputer in his pocket. As we have “progressed” through the values of our economies and our societies, we have mistakenly left the bosom and cradle of species, which is the land and the animals. But at a time when our decisions are more important than ever, I look to the many solutions that are there. I know that for our community it is important to be able to take advantage of these technologies, technologies that are embodying our Indigenous values of living in balance with our land in perpetuity. Dana Tizya-Tramm, Chief, Vuntut Gwitchin First Nation

The Vuntut Gwitchin First Nation community of Old Crow is off the grid in every sense. The small rural community with its 250 inhabitants lies 80 miles North of the Arctic Circle in the Yukon Territory. It’s over one hundred miles from any other community, is not connected to a major road system – or any road system at all – nor to any centralized energy grid. Its remote location has for many years rendered Old Crow dependent on diesel. The fuel had to be flown in by planes, leading to some of the highest economic and ecological electricity costs in Canada.

That’s changing. In 2008, the Vuntut Gwitchin Government decided to find green energy alternatives for their community and to gain long-term energy sovereignty and security. “Our people have been occupying this area as archaeological evidence suggests going back 27,000 years. So, I constantly ask myself: How were our people able to thrive in this inhospitable environment? Because we survive off the energy systems local to our areas, the energy in the plants, the animals and in the nutrients – all driven by the sun,” tells Chief Dana Tizya-Tramm of the Vuntut Gwitchin First Nation.

In this respect, Chief Tizya-Tramm says, the community’s solar energy project was an application of modern technology to an ancient energy source. One that had the potential to give the Vuntut Gwitchin both economic and energy sovereignty.

Good for the environment and the pocket

Today, 2,160 single sided mono-crystalline solar panels are lined up adjacent to the airstrip, oriented east/west to maximize long daylight hours and the trajectory of the Arctic summer sun. And, even in minimal daylight, faint sunlight reflects in the snow and generates electricity.

“Utilizing the power of the sun through a photovoltaic system, we will be generating 940 kW DC, 480 kW AC of electricity and through a microgrid system deliver clean energy to our community,” explains Chief Tizya-Tramm. Once fully operational, Old Crow’s solar farm will reduce the amount of fuel needed to drive the community’s generators by 190,000 liters diesel each year, cutting greenhouse gas emissions by 680 tons CO2e per year. This is the equivalent of taking 140 cars off the road.

The solar farm doesn’t only cut environmental costs, gross profits are expected to equal 410,000 Canadian dollars each year during the 25-year lifespan of the project. An electricity purchase agreement governs the fiscal relationship between the local utility and the community. Through this agreement the Vuntut Gwitchin will sell the local utility energy generated by sunlight at a price representing avoided fuel costs and deferred maintenance and capital costs savings (approx. 65 cents per kwh.)

“We have effectively unlocked our centralized relationship, where previously our fiscal energies were going to another shareholder, draining our community financially,” says Chief Tizya-Tramm.
Over the next 25 years, Old Crow’s solar project will generate an estimated revenue of 10,5 million dollars - money that will be invested into new renewable energy projects such as biomass and wind energy.

A shift across the Arctic

The Vuntut Gwitchin First Nation is a prime example of a remote, off-grid community taking its sustainable energy future into its own hands, gaining sovereignty while guaranteeing a clean electricity supply to its households. It’s the success story of an Indigenous community acting as project proponent and owner of its infrastructure. But it’s not a unique story – fortunately.
High-energy demands, which are met with expensive, oftentimes unreliable supplies and inefficient, polluting energy sources, are a common challenge across the Arctic. Therefore, over the years, more and more communities have started to lead a shift towards renewable energy solutions.

While energy generation can take many forms across the Arctic – from solar to wind, from hydro to tidal, biomass and geothermal – there’s a pattern underlying successful energy transitions. “We find that these projects are built on a set of important enabling factors across the Arctic. The shift towards renewables is a complex and dynamic process and at any scale you need a vision and key drivers guiding the project, as well as champions who are advancing the project at a local level. Community engagement and the access to networks and expertise are instrumental, as is the recognition that the process of realizing these projects needs time and commitment,” says Jennifer Spence, executive secretary of the Arctic Council’s Sustainable Development Working Group, and convenor of an energy session at the 2020 Arctic Resilience Forum.

The vision of a cleaner future

Early in the project planning, the Vuntut Gwitchin Government shared its vision with the community– and got everybody on board. “Modelling showed us the project would reduce 680 tons of CO2e each year by avoiding diesel combustion and the transportation of diesel. That was a mandate that resonated very easily within the community. Thus, there was no pushback from the community and we had full support across the board,” explains Chief Tizya-Tramm, who himself was one of the champions driving the solar farm project. 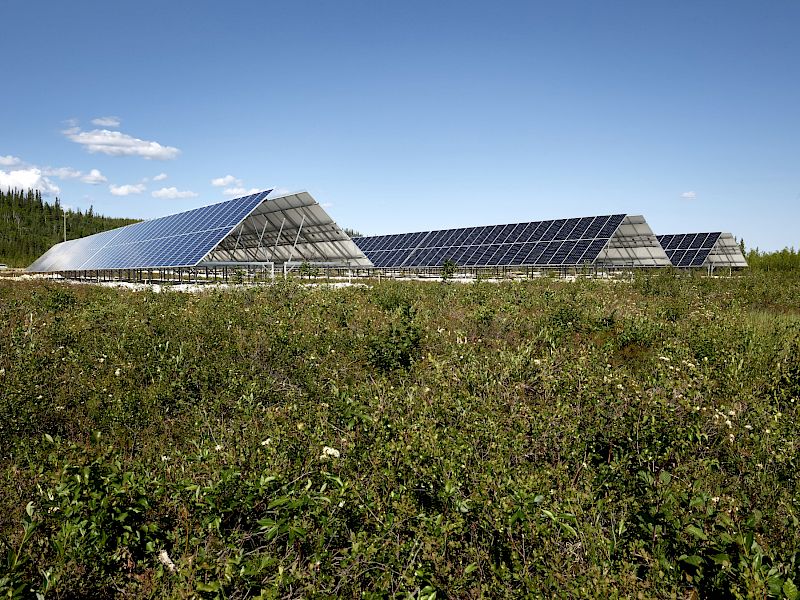 Ancient and modern energy systems side by side. (Photo: GBP Creative)

The community in the driver’s seat

The Vuntut Gwitchin Government held open and wide community sessions including everyone – from young children to elders. While the whole community supported the project, some raised concerns. “The elders were the only ones who gave us some very stern words. We were not to build the solar farm over a local berry patch. However, this was actually the best area for placing the panels,” says Chief Tizya-Tramm.

The project team found a solution to leveraging the sunniest spot in the community while keeping the berry bushes. They designed the project in a way that would minimize disturbance to the local flora, and they did not fence the area, allowing citizens access to the site. “Our elders are picking berries in an ancient natural energy system beside a new modern technological energy system,” says Chief Tizya-Tramm.

One major challenge in remote communities can be access to technical know-how and expertise – and the global pandemic is adding to the problem. “Because of the pandemic, we were not able to do a full launch of the project in 2020 as we had hoped. We don’t have technical expertise within our community, and we’re relying on technical consultants from outside the country,” says Chief Tizya-Tramm. Until the community is able to bring in the technical expertise, Old Crow’s diesel generators will still be running.

Yet not all expertise needs to be on site. Remote networks of energy experts for example are a valuable tool to connect people across communities. “Networks bring people together either virtually or in person and can provide support, mentorship, peer connections, experiences and learning. Building these connections is invaluable to empower energy champions across the Arctic to develop the knowledge and skills needed to launch clean energy projects in their own community or region,” says Devlin Fernandes, executive secretary of Gwich’in Council International and co-lead of the Arctic Remote Energy Networks Academy, or ARENA for short.

Beyond one size fits all

Finally, national and regional policies can act as enabling factors. Governments across the Arctic have made the green energy transition a national priority to meet decarbonization targets. However, national plans might not always translate well with local realities in the Arctic.

“If we regard energy as an integral part of resilience, we quickly realize that the one-size-fits-all approach of major national policies doesn’t work really well for remote communities. We do for example see a resistance against wind power in Norway. However, if you set up windmills to meet a community’s energy need, while being respectful of livelihoods and wildlife, resistance ceases. In communicating the energy transition, we need to make projects and ambitions relatable to people,” says Kristín Linda Árnadóttir, Chair of the Arctic Council’s Expert Group on Black Carbon and Methane.

National regulations and policies also need to take into account that at individual and community levels, energy needs and decisions are weighed against other priorities that are equally important and often equally constrained.

Once fully up and running, the Old Crow solar project will allow the community to put energy directly on to the grid. “This will enable us to turn off the diesel generators as our battery system has electricity for one hour, which is enough time for the diesel generator to safely start back up when solar generation is interrupted by cloud cover or other intermittencies. Unfortunately, our diesel generators are still running but once clearance is given and the pandemic settles down a bit, we will be able to bring in the technical expertise that can bring the project to its full viability,” says Chief Tizya-Tramm.

Transitioning a community towards more sustainable energy solutions might seem like a daunting task. But, it does not have to be! Here are three tools developed by the Sustainable Development Working Group that take you that step closer to renewable energy:

Finding the nexus between water, energy and food in the Arctic