“Plastic in a Bottle” afloat again

Plastics in the ArcticАрктические данныеОкеанЗагрязнителиФинляндияНорвегияРабочая группа по защите арктической морской среды
In September 2019, the Arctic Council’s Protection of the Arctic Marine Environment (PAME) Working Group launched its first “Plastic in a Bottle”, a capsule equipped with a GPS transmitter, tracking the trajectory of plastics in the ocean. Now, PAME has teamed up with Wageningen University & Research, the Finnish Environment Institute and the Norwegian Polar Institute to launch three further capsules. The goal is to see how plastics potentially makes its way from the North Sea and the Baltic Sea into Arctic waters – and to raise awareness about the issue of marine plastic pollution.

On 6 April 2020, PAME’s first “Plastic in a Bottle” washed ashore on the Isle of Tiree in Scotland. Since Iceland’s Minister for the Environment and Natural Resources released the bottle from an Icelandic Coast Guard vessel, the bright yellow capsule had covered a distance of 7,000 kilometers over 207 days. The GPS transmitter within the capsule allowed PAME, researchers across the Arctic and the public to follow its journey – past the east coast of Greenland and across the northern part of the Atlantic until it landed on the beach of Tiree.

However, this was only the beginning of the journey of PAME’s “Plastic in a Bottle” project. Launched during the Icelandic Chairmanship of the Arctic Council (2019-2021), the initiative continues into the Russian Chairmanship and seeks to explore new marine litter highways in Northern Europe. Since the end of May, three further capsules will drift with ocean currents and waves to yet unknown destinations.

“It sometimes can be easy to forget the bigger picture. But a plastic bag, a cup or a facemask is not only a nuisance on the local beach. Plastics can travel far distances in the air and water and reach regions far removed from more populated areas. This is a serious issue for the marine ecosystem, birds, sea dwellers and not least us humans." Jessica Nilsson, Chair of PAME

The launch of the second capsule was organized by Wageningen University & Research and Leeways Marine, in collaboration with PAME and the Dutch Government, who funds the capsule. The Dutch collaboration partner Eelco Leemans of Leeways Marine released the bottle from a sailing ship some 25 miles West of the island of Texel in the Netherlands.

“Not many people realize what happens to 'our' plastic waste once it enters the North Sea. Under the influence of wind and sea currents, this capsule may travel to a nearby beach or, who knows, perhaps even to the Arctic. This is certainly a possibility, since every year, substantial amounts of plastic are transported there from Western Europe and North America,” said Dutch researcher Wouter Jan Strietman.

A third capsule, funded by Finland’s Ministry for Foreign Affairs, will be released in the Northern Baltic Sea during an annual research cruise by the Finnish Environment Institute. Marine litter is a recognized environmental problem in the Baltic Sea– a semi-enclosed marginal Arctic Sea that freezes over annually and experiences high pressure from human activities on the marine environment. By releasing the capsule in this location, it will be possible to follow the transport of marine litter in a relatively densely populated and closed marine system compared to the Arctic.

The fourth capsule will be the northernmost launch for the Plastic in a Bottle project to date. The Norwegian Polar Institute will launch the capsule on its research cruise west of Svalbard in late June. The capsule will catch the northward current that transports marine litter deep into the Arctic Ocean, which will demonstrate high Arctic transport routes. 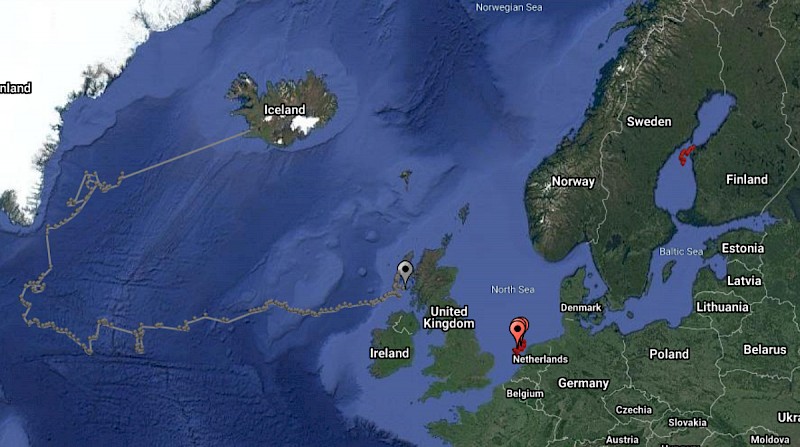 PAME’s “Plastic in a Bottle” project aims at simulating how marine litter and plastics can be expected to travel far distances into and out of Arctic waters. So far, the understanding of trajectories of plastics in the ocean is limited, but with these capsules, PAME is seeking to gain valuable information to better understand the problem. The project also serves as a way to raise awareness on the issue of marine litter.

“It sometimes can be easy to forget the bigger picture. But a plastic bag, a cup or a facemask is not only a nuisance on the local beach. Plastics can travel far distances in the air and water and reach regions far removed from more populated areas. This is a serious issue for the marine ecosystem, birds, sea dwellers and not least us humans,” said Jessica Nilsson, the new Swedish PAME Chair.

The “Plastic in a Bottle” is feeding into PAME’s larger efforts to tackle marine litter and plastic pollution in the Arctic. At the Arctic Council Ministerial meeting in May 2021, PAME released the Regional Action Plan on Marine Litter in the Arctic. The Action Plan supports Arctic States’ efforts to reduce marine litter in the Arctic marine environment, to prevent the potential negative impacts and mitigate the risks it may pose, and to improve cooperation on and awareness of this shared objective. It addresses both sea- and land-based activities, focusing on Arctic-specific marine litter sources and pathways, and will play an important role in demonstrating Arctic States’ stewardship efforts toward reducing the negative impacts of marine litter to the Arctic marine environment.

The journey of the capsules can be followed in real time through an online map on the PAME website. Once washed ashore, a message inside the capsule will instruct the finder what to do and who to contact.