Introducing the new SDWG Chair: “We can bring concrete results to people in the Arctic" 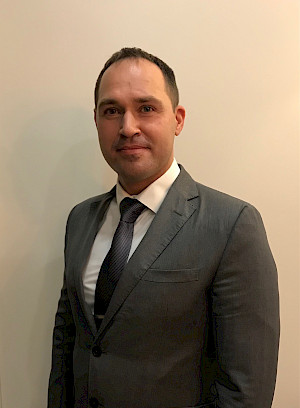 The Russian Arctic is home to over 2.5 million people. This is one third of the entire Arctic population and includes the individuals of 47 distinct Indigenous Peoples. People of the Arctic, including Indigenous Peoples, therefore is a natural priority to the Russian Federation during its two-year Arctic Council Chairmanship term – and many of the projects targeted to improve Arctic inhabitants’ wellbeing and health, safeguard their cultural and linguistic heritage, and ensure a sustainable economic development of the region naturally fall into the portfolio of SDWG.

The Working Group currently has 12 ongoing projects, addressing issues ranging from food production and remote energy to gender equality and suicide prevention. The man who is leading SDWG through its ambitious workplan for the period 2021 to 2023 is Dr. Oleg Solyakov. He is the Deputy Director of the Department of Technology Development and International Cooperation within the Russian Ministry for Development of the Russian Far East and Arctic and has been Russia’s Head of Delegation for SDWG since the beginning of the Icelandic Chairmanship (2019-2021). “I recognize the strong leadership of my predecessor Stefán Skjaldarson. He has done excellent work for SDWG and I’m looking forward to now leading the Working Group myself,” says Oleg Solyakov.

Before joining SDWG, Oleg Solyakov had already gained expertise on Arctic issues as he was involved in developing a national strategic document on technology development and international cooperation in the region. A topic bridging his competences, because by training Oleg Solyakov is a marine engineer with ten years of experience at sea and in rivers – including Arctic waters. He also is an associate professor in technical science.

"Through SDWG’s work, we can bring concrete results to people in the Arctic, especially in the fields of socio-economic development and cultural heritage."

Positive change for people in the Arctic

In his new role, Oleg Solyakov finds inspiration in working with representatives of the Arctic States and the Indigenous Permanent Participants. “SDWG and its experts can make significant contributions to the sustainable development of the Arctic. The Russian Chairmanship gives special attention to people in the Arctic and SDWG has an important role here. Through SDWG’s work, we can bring concrete results to people in the Arctic, especially in the fields of socio-economic development and cultural heritage. We want Arctic inhabitants to feel changes for the better, also in relation to the impacts of climate change,” he states.

During his role as Russian Head of Delegation to SDWG, Oleg Solyakov was able to mobilize and coordinate the involvement of Russian experts to SDWG and its two Expert Groups on human health and social, economic and cultural issues. “Together with this team of experts, it was possible for Russia to prepare numerous project proposals that we believe can make significant contributions to the sustainable development of the Arctic and support people living in the Arctic”, he explains. Four of these proposals have now been integrated in SDWGs workplan: the Arctic Demography Index, Digitalization of the Linguistic and Cultural Heritage of Indigenous Peoples of the Arctic, Arctic Hydrogen Energy Applications and Demonstrations and Biosecurity in the Arctic. Other projects related to sustainable shipping and sustainable financing are still under consideration.

Projects contributing to the bigger picture

These projects often tie into larger efforts and international frameworks. “The digitalization of cultural and linguistic heritage project is aimed at supporting efforts to preserve Indigenous languages in accordance with the goals and objectives of the 2022-2032 UN International Decade of Indigenous Languages,” Oleg Solyakov explains. The biosecurity project in turn, which is carried out in close collaboration with the Arctic Monitoring and Assessment Programme (AMAP) will contribute to supporting public health systems and public services in implementing a quick response to current and future biological threats, which are related to the uncontrolled spread of highly virulent pathogens, parasites, biotoxins, and other biohazards across the Arctic. The Russian Chairmanship hopes that this project will contribute to improving the health of Arctic inhabitants. “In this regard, the SDWG’s project on Arctic Community Perspectives on Covid-19 and Public Health will also play a vital role to tackle an ongoing health challenge,” Oleg Solyakov adds.

"We want Arctic inhabitants to feel changes for the better, also in relation to the impacts of climate change."

Despite his focus on the current initiatives of SDWG, the new Chair also enjoys thinking back on experiences linked to the previous Chairmanship. While the pandemic put a halt to in person meetings early on in Iceland’s Chairmanship, Oleg Solyakov remembers his first SDWG meeting. “We visited a fish factory where we witnessed processes of cleaning and packing fish as well as new technologies, which produced medicines from the remaining parts of the fish. This was very interesting to me, because this is the future and we have to share this expertise with our countries,” he confirms. The meeting’s social program was tightly related to SDWG’s blue bio economy project – one of Iceland’s answers to a sustainable economic development in the North.

When Oleg Solyakov will be able to welcome SDWG delegates to Russia and share his country’s local knowhow is still uncertain, but we can be quite sure that it will create equally memorable and inspiring moments for the visitors as Solyakov’s visit to the Icelandic fish processing plant.